All babies and young children thrive on snuggling, being cradled and rocked, and tickled and kissed. It’s an almost irresistible draw to adults to want to  stroke a baby’s head, watch their little fingers curl around their own, and gaze in adoration as they hold this tiny, amazing human.

Babies and children NEED emotional attunement and physical comforting in order to thrive; these are basic needs as important as food and water.  When parents exhibit what are called “coo behaviors,” or behaviors that express love, care, and affection towards the child, also known as emotional attunement, the child then feels soothed and calm.

Babies have no ability to self-soothe and really rely on caregivers to do this for them.And when they’re upset and can’t settle, emotional attunement and physical comforting are  vitally important, not just so they can soothe but also because it helps their growing nervous systems to develop optimally. Unfortunately, young children don’t always get their emotional needs and physical soothing met. This can lead to disruptions in their emotional, mental, and physical growth as that child grows into their adult years.

Why We Need Attuned Touch and Co-regulation Early On

Touch is the first sensation to develop in utero as the little baby is bathed in their mother’s amniotic fluid and is the most developed sensory modality at birth.  All humans NEED physical touch, but it’s most vital during the pre-verbal years, from birth to age three.

It’s during these first few years of life that the foundation of the nervous system is laid.  Co-regulation happens naturally between a parent and child when we are very, very small. It’s the way parents know to soothe their child, even before the baby realizes they need it.

Loving physical touch from parents is also paramount to the bonding process. Indeed, parents and babies alike need this touch in order to establish a SECURE, healthy attachment.  An amazing hormone called oxytocin is released when humans snuggle, hug, and have other similar physical contact. This hormone makes us feel closer and connected with each other. It makes us feel good. And it helps us love each other.

These verbal, non-verbal, and touch-based interactions between the ages of 0 to 10 help create an early map for the nervous system. For a child, consistent and reliable emotional attunement in a nurturing environment sets the stage for a well-regulated and healthy nervous system as an adult. The benefits to the adult with an optimally developed nervous system includes curiosity, creativity, generosity, resilience, healthy social skills, and more.

What Happens When There’s Not Enough Attuned Touch?

When emotional attunement and soothing touch is missing in a child’s life, bonding is negatively affected. Deep bonding with their parents sets the foundation for healthy relationships throughout their life. When this doesn’t happen, a child grows up having difficulty forming relationships with others.

Likewise, as their nervous system is still in its infancy, young children don’t have a chance to learn how to regulate themselves when loving touch is missing. When they don’t receive the reassuring, calm feedback that comes from a parent or caregiver’s touch, their brain isn’t receiving the input it needs to develop fully.  Healthy coping mechanisms are replaced with unhealthy coping mechanisms as that child gets older.

Unfortunately, the power of touch isn’t used nearly as effectively as it could be in western culture. Researchers have conducted many studies on touch. They’ve found that even a simple pat on the back alleviates tension. The cultures that display the most frequent touches between friends are often the happiest ones.

It should give us food for thought that American society is on the lower end of how much physical touch is displayed.  The hard truth is that we are a deeply touch-deprived society and this has negative impacts on many levels.

The Power of Co-Regulating Touch

In recent years, therapeutic touch approaches have proven to be very effective at addressing early childhood trauma. Co-regulating touch, developed by Kathy Kain and Transforming Touch developed by Stephen Terrell, are passive forms of therapeutic touch designed to help the nervous system function more optimally and move towards greater resilience. It helps move you out of “survival physiology” into thriving and flow states. 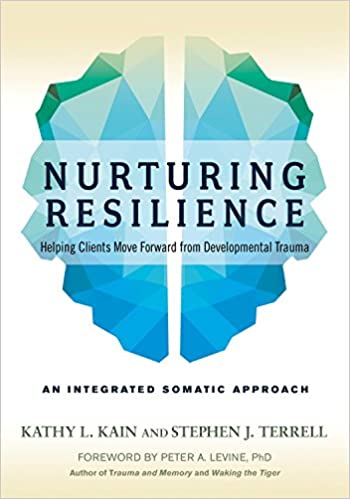 During Co-Regulating Touch therapy sessions, the therapist will hold your skull (brainstem), ankles, or kidney area for extended amounts of time. These areas are important touch points for the nervous system. When they are held, the nervous system is able to start to learn what it wasn’t able to in early childhood—how it feels to be calm and safe.

Early childhood trauma occurs in pre-verbal years. At such a young age, children don’t have the words to describe what they’re feeling. But their bodies know. Of course, the need for positive touch doesn’t end in childhood; it continues to be vital throughout a person’s lifespan.

This is one reason why Co-Regulating Touch therapy is particularly helpful for adults. It’s a way to communicate on a neurological level that you’re safe now. The nervous system receives the positive feedback it needed so many years ago and begins to heal.

Check out what our clients say about receiving Co-regulating Touch.

At Somatic Therapy Partners, we specialize in treating early adverse childhood experiences though Co-Regulating Touch. If you believe you are suffering from the negative impacts of early childhood trauma, we would love to speak with you about how our trauma therapy treatment method can help.